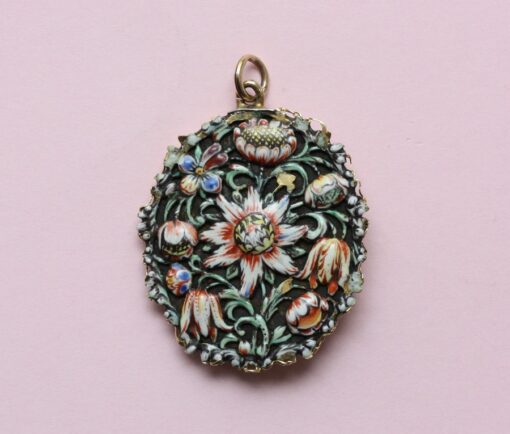 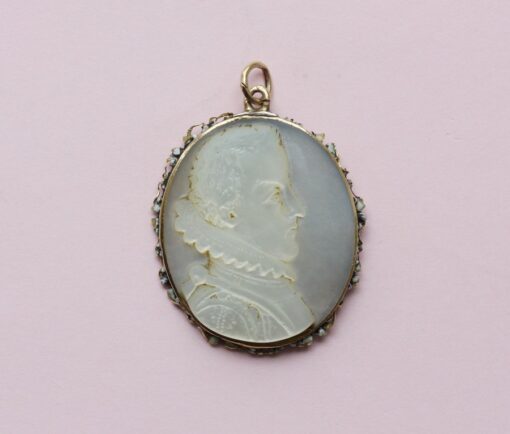 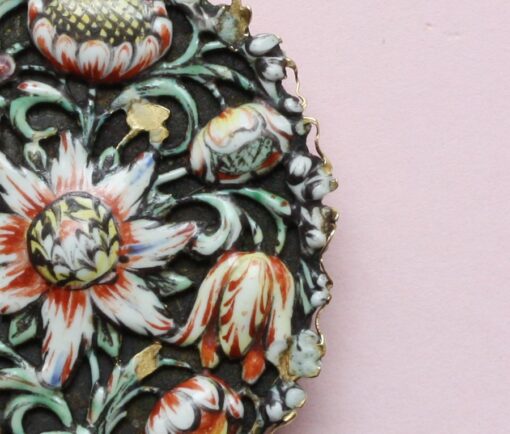 The young man portrayed in this gold oval pendant – most likely the lid of a boîte a portrait or miniature case locket – could be Charles I, King of England, as a teenager. In 1611 he received the Order of the Garter, the knotted ribbon of which is visible at the back of his neck. The likeness might be inspired by a portrait by Nicholas Hilliard, a British goldsmith and official court limner, who was famous for his outstanding miniatures. The sitter might also be Charles’ brother Henry Frederick, Prince of Wales, who died in 1612 at the age of 18, effectively making Charles I heir to the English throne. These portraits were in great demands as gifts among dignitaries and the use of the refined and fragile mother-of-pearl suggests a commission emanating from higher circles.

The other side of the medallion features a beautiful enamel floral relief on a black background, which could have been made around 1640, perhaps by a follower of Jacques Noualhier (1605-1674). He had invented this type of relief-enamelling using engraved moulds into which he poured white enamel with thin gold leaves. The black background is characteristic of his workshop practice. Similar examples come from the atelier of London’s greatest watchmaker, the Huguenot David Bouquet

In the 1640s, when the King was struggling to keep his throne during the English Civil Wars, the owner of this portrait may have asked a new mount in order to demonstrate his Royalist sympathies.