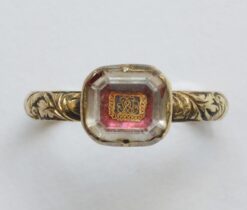 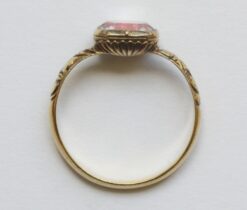 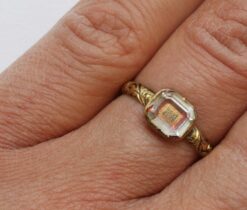 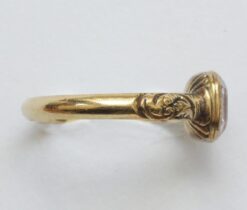 After King Charles I was killed for treason under the rule of parliamentarian general Cromwell, the People loyal to the monarchy (Royalists) wished to memorialize their lost King, to show their support and sympathy, by wearing jewelry: slides, pendants, rings, earrings or cufflinks with the King’s initials (as monograms or worked into a cypher), crowns, or his portrait, closed set in gold or silver under a facetted rock crystal. These became known as Stuart crystals, as they were commemorative of King Charles I, of the House of Stuart. Later in the 17th century, the crystals were worn by Jacobites against the deposition of James II and the Stuart monarchy in 1688. Showing support for fallen monarchs was dangerous, so many Stuart crystals were small and were worn secretly.

Jewels that actually contain King Charles I’s or another Royal’s hair are rare. It is more usual to find Stuart crystal jewels with a cyphers (in monogram) over hair or foil. Occasionally there are even pieces of foil or gold filigree worked into angels, crowns, skulls, swags, skeletons, doves, etc. Later in the 17th century Stuart pieces were worn as personal love tokens or wedding commemoratives, with symbols of love, i.e., hearts, putti, cherubs, or wreaths of flowers or personal monograms. This tradition continued through the 18th century.