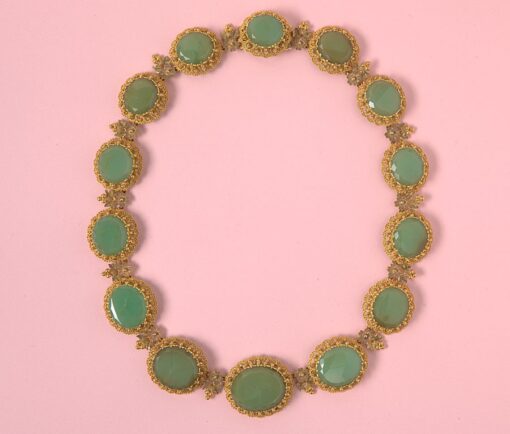 Maison Chaumet is one French jewellery houses residing at the Place Vendôme in Paris. The house is now owned by the LVMH Group, but it was founded by Marie-Étienne Nitot in 1780.

Nitot and his son, Francois Regnault Nitot were Napoleon’s personal jewelers. They made almost all the extravagant jewels for Josephine and Marie Louise, but also the tiara for Pope Pius VII. The pearl and cameo tiara that princess Victoria of Sweden wore at her wedding in June 2010 is a beautiful example of an Empire jewel by Nitot.

After the fall of Napoleon, the business continued under the direction of Jean-Baptiste Fossin and his son, Jules Fossin. Together they made beautiful romantic and naturalistic jewels that were inspired by the Italian Renaissance and French 18th century. They sculpted their jewels into vine leaves, olive and chestnut trees, hawthorn and grapes using topaz, emerald, ruby, and diamond. Among their clients were the Duchess de Berry, the French Royal family, Russian Prince Anatole Demidoff, and successful painters, sculptors, writers, and theater artists. The Fossin’s succeeded in capturing the spirit of Romanticism in jewellery just as Nitot & Fils had done for the Empire.

Often Jules Fossin used to work for Louis-François Cartier, when Cartier had just started his business in 1850.

In 1848 Jules Fossin set up a London branch in partnership with Jean Valentin Morel who was assisted by his son, Prosper Morel. Morel gained the elites of England, becoming the jeweler to Queen Victoria. On his return to Paris in 1854, Prosper Morel joined Jules Fossin whom he succeeded in 1868.

Prosper Morel’s daughter married Joseph Chaumet in 1875. Chaumet had begun his jewelry career at the age of fifteen, working in his parents’ jewellery shop in Bordeaux. Upon moving to Paris, he was hired by his future father-in-law. By 1885, he assumed management of the firm. In 1889, Chaumet took over the company, simultaneously changing the name. Under his direction, the firm won prizes at all of the international exhibitions, supplied jewelry to many of the Royal houses of Europe. He established himself as a master of the Belle Époque, creating both elegant and imposing jewels for royalty and the aristocratic. In 1907 Chaumet opened a boutique at 12, Place Vendôme, which remains today. Marcel Chaumet (1886-1964) replaced his father in 1928, and adapted the houses style to reflect the geometric styles of the Art Deco period. The firm closed shortly in 1934 during the Depression, but reopened and thrived following World War II. Chaumet asserted itself as a pioneer of the post war period, which inspired Christian Dior’s new look and the revival of Paris as the center of fashion. The firm is still creating beautiful jewellery.