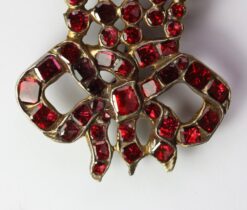 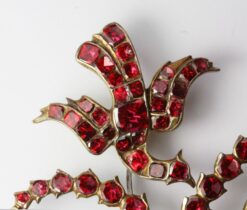 A large silver gilt aigrette with flat cut bright rhodolite garnets in the form of a corn bundle bound together with a bow, and with ‘en tremblente’ a bird, England, 18th century.

An aigrette, in jewelry, is so-called because of its resemblance to the feathers and plumes on top of the head of an egret. These jewels were often meant to be worn as a turban ornament.