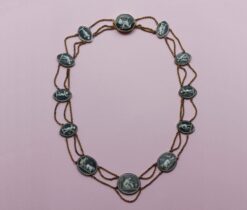 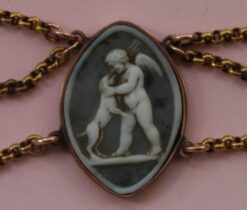 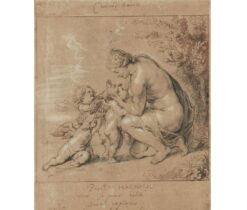 This delightful necklace is an elegant evocation of Classical antiquity. It may well have begun life as an intimate and treasured reminder of the Grand Tour. The cameos would have been bought in Italy; then set into a necklace back home in England. Its 11 shell cameos are set in rose gold and then connected by three gracefully looping tiers of gold chain. Each cameo depicts a scene from the life of Amor. Whether known by that name or as Cupid or Eros, great artists often took the god of love as subjects for their work. Some of them inspired the carver of these cameos. For example, one of them evokes Parmigiano’s midsixteenth- century painting, “Cupid Making his Bow,” while another is taken from “Venus Nursing Three Cupids,” an early seventeenth-century drawing by Peter Paul Rubens.

The large oval cameos hang at the front of the necklace with another serving as its catch (damage) at the back. In between are 8 navette- shaped cameos. All are carved against a dark ground and are set with flat, closed backs. England, circa 1810.