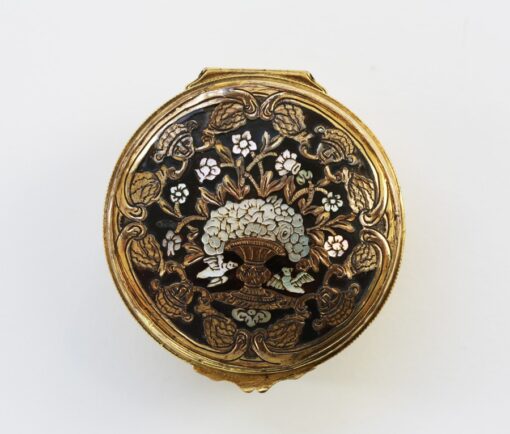 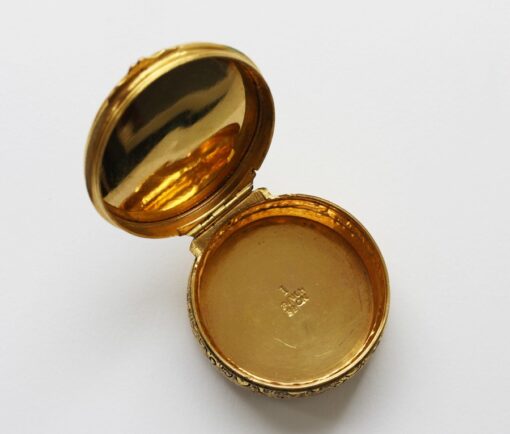 A rare George II gilt-metal circular box with bombe sides. The lid is inset with a panel inlaid with stylised heads and a basket of flowers with two birds in mother-of-pearl and gilt metal. The side of the box flat-chased. The interior of the box is stamped with the name ‘I. Pinchbeck’, England, 18th century.

One other piece, a chatelaine hook (in the Museum of London) has been noted with the mark of ‘J. Pinchbeck’. A number of gilt-metal escutcheon wine labels survive marked ‘C.P.’ on the reverse, for Christopher Pinchbeck Junior. Pinchbeck is a form of  brass, an alloy of copper and zinc, mixed in proportions to closely resemble gold. It was invented by Christopher Pinchbeck, a clockmaker. Since gold was only sold in 18-carat quality at that time, the development of Pinchbeck allowed ordinary people to buy gold ‘effect’ jewellery on a budget. Christopher signed his pieces to prove they were not gold, and it was used in places like stagecoaches where the risk of theft was great.

After the death of Christopher Pinchbeck Senior in 1732 his sons went into business as toymen independently: each claiming to sell the real Pinchbeck alloy. The eldest son, Christopher, was abroad at the time of his father’s death, and so Edward took over the premises of Christopher Senior. A subsequent court case between Edward and George, Christopher Junior, and John Pinchbeck was decided in favour of Edward.