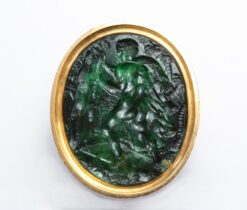 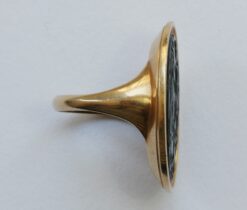 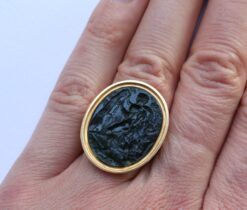 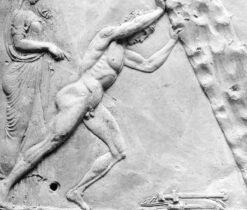 The finest most detailed agate intaglio of the Greek hero Theseus is set in an 18 carat gold ring, both 18th century.

Theseus was the son of Aegeus, the king of Athens, and his wife Aethra. Aegeus, concerned that he had reached a certain age without having descendants, went to Delphi to consult the Delphic oracle, but he received a prophecy he could not understand. So, on his way back home, he decided to stop by the city of Troezen and ask its King Pittheus for advice.

Pittheus tricked Aegeus to sleep with his daughter Aethra, in the hope that Aethra would conceive a child. But in the same night, Aethra had been previously seduced by Poseidon. This way, Theseus was considered to have had two divine origins.

Before heading off to Athens, Aegeus left a sword and sandals under a rock and told Aethra that when his son was strong enough to lift the rock, she should send him to Athens. Knowing who the father of Theseus truly was.

Theseus grew up in the palace of Pittheus and indeed became an extraordinarily strong man. At the age of 16, he already was capable to lift the rock and leave for Athens. Although Theseus was advised to travel by sea, he prefered to take the land route from Troezen to Athens; this way, he had to go through numerous adventures and obstacles, also known as the “Labors of Theseus”.